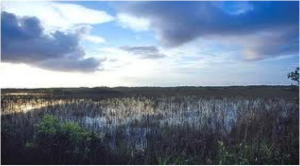 Lectures to Explore Red Tide, Invasive Pythons and Other Environmental Issues in the News

Note: Dr William Mitsch and the Everglades Wetlands Research Park have announced the schedule for this season’s lecture series. As most of our members know, our two Fellowship Endowed Interns are part of this important team  conducting their research at the FGCU’s Kapnick Center at Naples Botanical Garden.

Florida has been making headlines this year with one environmental news story after another: red tide, invasive species, pollution that threatens tourism. The Everglades Wetland Research Park at Florida Gulf Coast University will tackle these timely issues and others of regional and global concern in its second “Moonlight on the Marsh” lecture series beginning Thursday, Dec. 12.

Distinguished scientists from the United States and abroad will share their expertise in the public lectures at the research park, which is at FGCU’s Harvey Kapnick Education and Research Center at the Naples Botanical Garden, 4940 Bayshore Drive, Naples.

“Moonlight on the Marsh” was launched last year by renowned wetlands researcher William J. Mitsch, Ph.D., who was appointed director of the research park and Juliet C. Sproul Chair for Southwest Florida Habitat Restoration and Management.

“The inaugural year was quite successful, with an all-star cast of scientists and engineers suggesting how we can protect and clean up the environment,” Mitsch said. “The 2013-14 series is even better and will focus on some of the gigantic ecological and environmental issues we have in Southwest Florida.  Experts will talk about red tide, beach pollution and invasive pythons in the Everglades. We also have two presentations on wetlands and how they can provide important ecosystem functions.”

Ulo Mander, professor of landscape ecology and geography department head at the University of Tartu in Estonia, will launch the lecture series on Dec. 12 with a presentation on water quality improvement with wetlands.

Other talks in the series are:

All lectures are at 7 p.m. in the Kapnick Center auditorium. Seating is limited and can be reserved for a $5 donation. Call (239) 325-1365 for reservations or more information.

The Everglades Wetland Research Park is dedicated to research on the wise management of freshwater and coastal ecosystems of Southwest Florida and to protection and enhancement of wetlands and water resources worldwide.  Details are on the park’s website, www.fgcu.edu/swamp.