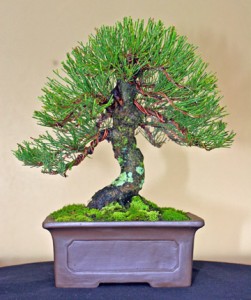 Bonsai (pronounced bone-sigh) is an ancient oriental horticultural art form. The word Bonsai literally means, in both Chinese and in the Japanese language, tree-in- a-pot. Originally developed in the Orient almost 2000 years ago, today the sublime art of bonsai is practiced throughout the world. Shape-harmony-proportion-scale are all weighed carefully as art, and the human hand combines this in a common cause with nature.

Dorothy & Ernie will show us how to start a bonsai from scratch and how to care and nurture the plant. They will bring a starter tree to be raffled!

Ernie Fernandez, a native Floridian with a commercial and graphic arts background, is familiar with Florida and its tropical species. His beautiful collection of trees is a reflection of his artistic background. Ernie has worked with a host of impressive artists including John Naka, Ben Oki, Norm Nelson and Yuji Yoshimura. He has been teaching bonsai since 1985.

Dorothy Schmidtz started in bonsai 8 years ago, was elected twice among the national finalists of the New Talent Competition, won the open Florida BSF Instructor Scholarship Award in 2005 and the coveted Ben Oki Award in 2006 as first and only female. She is presently a member of the Bonsai Society of Southwest Florida, Treasure Coast Bonsai Society, Vice president of the Naples Shohin and Bonsai Society, member of ABS and BCI, and Second Vice President of the State Bonsai organization “Bonsai Societies of Florida” (BSF). Besides designing and growing bonsai trees, she is busy involved organizing and coordinating bonsai shows and conventions. She specializes in coniferous and tropical bonsai material, as well as in carving with hand and power tools.

Dorothy and Ernie, partners in life as well as bonsai, own the Bonsai Room Learning Center in Bonita Springs.

White Elephant Sale immediately precedes this meeting.  Come at noon and hunt for new treasures, including many things for the home and garden.

How to Register:
Members are free.  Guests cost $10. Click Here to Register Now.