A Cheer for a Volunteer 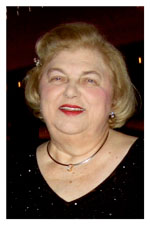 According to Linda LaRue Brown, Isabelle Staffeldt has been a valuable member who has always been willing to share her time and her talents.

The Naples Garden Club was located at the Depot at the time she joined. It seems that the Depot was not the perfect location to foster enthusiasm and creativity. There was a ladder which one needed to climb to reach the top floor. The alternative entry was through a set of stairs and over a large steel beam to get to supplies. Isabelle stated that “the girls don’t know how lucky they are” to work in the present locations.

Although Isabelle’s favorite memory is winning first place in the Flower Show, her heart belonged to the House and Garden Tour. She has forgotten in how many homes she served as Head Hostess, but at a minimum seven times. From her stories, it is apparent that to be a successful Head Hostess you must be a facilitator, mediator and mentor filled with creativity, ingenuity and flexibility.

“You always have to be very respectful of the owners of the homes,” she said. One of her goals as facilitator was to enhance the appearance of the homes with floral designs. By placing the designs in appropriate locations they also enhanced the floral arrangements themselves. She would always bring the floral designer volunteers to the homes to see what needed to be done to enhance the appearance of the home. Then the volunteers would select their room and their floral plan. From “artists homes” to large homes, from country kitchens to elegant rooms, each space had an agreed-upon plan. The perfect florals fit the perfect spaces.

Mediation came into play when dealing with volunteers and homeowners. Isabelle always “held back from designing” so that she could fill in where needed. Sometimes, she did two or three floral designs to complete the home. Some homeowners were flexible about the designs in the home, while others had very definite ideas. “Don’t move a thing”, “leave that artificial arrangement on the dining room table”, “leave that large black box in the middle of the table”, “come and remove all the floral arrangements in fifteen minutes”. Isabelle always complied, in the end, with the owners’ wishes unless she could dissuade them. Giving them alternatives, showing them how to improve the spaces, or just putting the fern in the bathroom closet were all options she used.

Some new members wanted to volunteer to do floral arrangements, but were afraid to try. Entered Isabelle wearing her mentor hat. She would talk through ideas with the volunteer, help choose a site in the home, give encouragement and stimulate ideas. Once, a volunteer brought a basket filled with grass and hard-boiled eggs for the country kitchen centerpiece. Unfortunately, the basket fell and cracked many of the eggs. “All we did was put in more grass and less eggs. It worked out fine,” she said. It is important to Isabelle that volunteers “feel like they have contributed.” “It is important to raise them up. We can always fix it,” she added. She has “never had a bad experience” volunteering for the Naples Garden Club.

Isabelle understands the importance of volunteers. “We need you. After all, the organization operates on the ability of everyone to volunteer.” The reason to volunteer should be “to express yourself with artistic feelings. Everyone wants to contribute something. We should give every volunteer that feeling of satisfaction for helping. We should always thank them in some way.”

According to Diane Green who was in charge of the volunteer list for the House and Garden Tour for several years, the Tour requires “185 volunteer positions that need to be staffed and thus, quite a few members do more than one job. Often a bus Hostess will work in Hospitality in the morning before her bus afternoon shift. Many members who do flower designs or Operations, will be house hostesses or stuff bags or do PR or be part of the Development Team and on and on we go.”

As for my interview with Isabelle Staffeldt, I found that there was no need to embellish. Her sense of volunteerism and her ability to work with volunteers speaks for itself.