In 1953, when the founding 30 members of the Naples Garden Club came together for their first meeting, Naples was a community of only 2000 people. Its first hospital had yet to open and many other familiar institutions were still years away from development. The Garden Club focused its efforts on educating members about horticulture and conservation and raising funds to help beautify the growing community.

Those first years featured annual picnic meetings at Caribbean Gardens and speakers from the University of Miami. Southwest Florida was undergoing rapid changes, and the Naples Garden Club participated in many of them. Its first charitable endeavors were plantings at the Naples Community Hospital, the new high school on Third Street (now the site of Gulf View Middle School) and the brand new western entrance to Everglades National Park.

Over the decades the Naples Garden Club has funded beautification efforts at most public and non-profit institutions in Naples, including many public schools, Big Cypress Nature Center (now the Conservancy of Southwest Florida), the City of Naples, the George Washington Carver Housing Project, Naples Depot, Palm Cottage, the Philharmonic and Rookery Bay. Its civic contributions have totaled over $600,000. It has given over $100,000 in scholarships.

In 1978 the Garden Club moved into new headquarters at the Naples Depot. Horticulture and design classes, monthly meetings and the Flower Show were held there until 2005, when we opened our new offices at the Naples Botanical Garden. 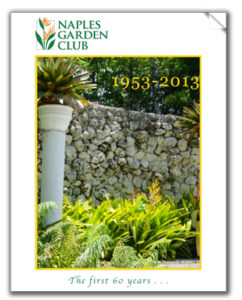 Naples Garden Club celebrated its 60th anniversary in 2013.  When 34 enthusiasts founded the club in 1953, Naples was a community of only 2000 people.

Click on the book to read a version of the Naples Garden Club History book written by Lydia Galton.