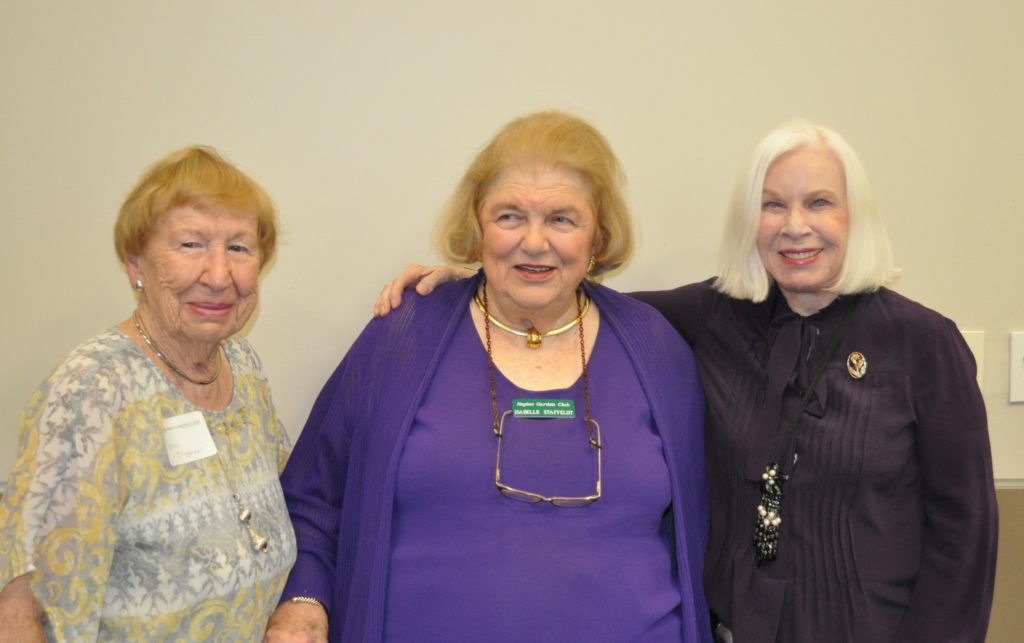 Elton John’s “Candle in the Wind” was the number one song the year four of our members joined Naples Garden Club.  The year was 1997.  These ladies all contributed to the club these past two decades in many ways.    Our club has been lucky to have them in our ranks and they were recognized with our Twenty Year Pin at the November membership meeting.

Dottie Brown (not shown) served on many committees but her greatest pleasure was serving as a HGT bus hostess. Dottie attended as many membership meetings and workshops as possible, taking the opportunity to connect with fellow NGC from Kentucky and hear renowned speakers.  Dottie will be given her pin at a future date.

Lydia Galton (right) was Flower Show Chair three years and club President for two years, overseeing the club’s move from the Historic Depot to our current office at NBG. Lydia has taken on positions at the District level and also is a certified flower show judge.  She currently serves on our Board.

Isabelle Staffeldt (middle) served as Membership Chair and Parliamentarian on the Board.  Isabelle implemented many procedures and policies that brought the club to a new age. She has been Floral Design Chair for HGT.  She has also been a Head House Hostess six times.

Helen Stephens (left) first served as Environmental Chair her first NGC year and President her second year…and the three years following.  Helen facilitated a strong relationship between the club and the City of Naples, FGCU, and Naples Botanical Garden.

Congratulations to all four of these special ladies.