How the NGC Idea Garden Got its Name 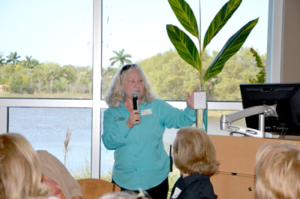 In 2008, when June Kroeschell was President of NGC, Brian Holley and Jill Barry from the Botanical Garden approached senior members of the Club to discuss naming rights for the second phase of capital improvements. One of the proposed options was the garden area outside of what was to become Kapnick Hall. The contribution would be made up of Garden Club funds combined with contributions from members.

Liz Chehayl became president in April 2008, as negotiations were still going on. Along came the big downturn in the summer of 2008 and many things changed. In phase two, only the Asian and the Florida Gardens were going forward. The yet-to-be named Idea Garden was part of the overall Florida Garden.

Then Liz took a brilliant idea to the board and then to NBG about a better way to use our Club’s name. Why not connect it to the new Idea Garden? Although the naming rights for that garden had been priced much higher than the area originally discussed, NGC was willing to swap.

So in November 2010, the Idea Garden became the Naples Garden Club Idea Garden, a place to inspire the small home gardener or patio gardener to grow vegetables and flowers in unusual ways. Since then thousands of people have visited “our” garden, asking questions, being inspired and even relaxing in the Adirondack chairs. In fact, Chad Washburn chuckled a bit when he reported that every now and then some visitors require emergency aid in getting out of those very deep but comfortable chairs.