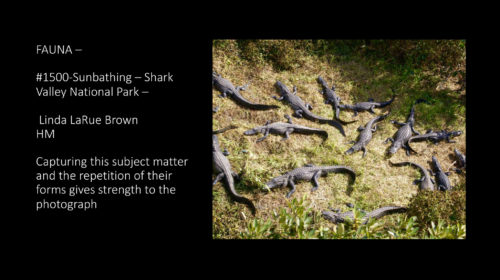 I first met Linda Brown 4 years ago at a House and Garden Tour. Linda, who was NGC President at the time, was taking pictures of the beautiful flower arrangements made by garden club members, which would later be posted on the NGC website. Our high regard for Linda’s talent has been recognized by the National Garden Club. She has received an honorable mention in the National Garden Club photography contest.

The photo contest is in honor of the 100th anniversary of our National Park System and entries were accepted from photographers throughout the country. The 30 finalists were displayed in the lobby of the Holiday Inn for the 250 attendees of the National Garden Club meeting in Portland ME to enjoy. Linda’s photo, in the Fauna division, is titled “Sunbathing” and was taken in Shark Valley National Park. The other contest winners are posted on the NGC website.  Congratulations Linda.