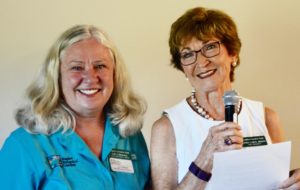 “Some people in the Club are stars and we know who they are because we see them in leadership positions,” Linda told the membership. “We also have members who are planets and they are even more important. They are the people behind the stage, who work to make everything that we do as a club happen and happen more smoothly. Liz Chehayl is both.”

Since then, Liz has been a planet, quietly circulating NGC’s hemisphere in all things horticulture. Liz is an accomplished horticulturalist and has unselfishly lent her expertise to many workshops and programs throughout the years. She has especially helped newer members become more comfortable with the process of entering horticulture in the Naples Flower Show through her classes and guidance.

Most of us, at one time or another, have gone to Liz for a botanical name or advice on the suitability of a plant for the Flower Show. As a staff member and the Brian Holley Curator of Collections at Naples Botanical Garden, Liz is an exemplary representative of the Naples Garden Club.