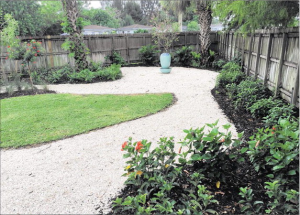 Serene moments alone in a garden can go a long way toward helping people continue on a path to recovery from substance abuse or treatment for mental health illness.

The David Lawrence Center has transformed green space at its Immokalee campus to have a therapeutic garden for patients and employees, similar to a therapeutic garden added at its main campus on Golden Gate Parkway several years ago. The Naples Garden Club provided a $10,000 grant to David Lawrence to build the serenity garden in Immokalee. Several community groups have volunteered to plant the garden, including the Shelter for Abused Women & Children and the Pace Center for Girls. The groups have committed to help with the garden’s upkeep, located at 425 N. First St. in Immokalee. The garden encompasses 3,015 square feet and is designed to provide a soothing atmosphere to help eliminate stress with fragrant plant, a ceramic water feature and benches for reflection.

The first serenity garden near the Crossroads residential substance abuse treatment center at the Golden Gate campus was funded by a $2,500 donation from the Naples Garden Club. It has been well received, he said.

“It is used all time,” Burgess said.

Both therapeutic gardens can help employees and patients take time during their day to downshift and reduce stress, which is one of the Blue Zones Project’s Power 9 principles for better health and longevity.

The American Horticultural Therapy Association in 1993 developed a checklist of qualities for therapeutic gardens, which included having gardens that stimulate the full range of senses, including memory, hearing, touch and smell.

Roberta Ross, president of the 225-member Naples Garden Club, said the club has been providing funds to nonprofit organizations and community groups for years for horticultural endeavors. In 2013, the club established a grants committee to oversee the application and decision making, Ross said. The main fundraising program is the annual House & Garden Tour, where the 2014 proceeds funded the $10,000 grant this year to David Lawrence. Ross hasn’t visited the new Immokalee garden yet but intends to when it is completed. “I understand it’s a fabulous place and a very pleasant place to be,” Ross said.

Caple Landscape in Naples designed the garden using features that are known to make people slow down and reflect, Darrell Caple, the landscape designer who owns the company with his brother, said.

The American Horticultural Therapy Association in 1993 developed a checklist of qualities for therapeutic gardens, which included having gardens that stimulate the full range of senses, including memory, hearing, touch and smell.

“We put in several sitting areas where people can stop and think,” he said.

He incorporated different flowering plants to attract butterflies and hummingbirds, and to have flowering displays at different times of the year, and the pathways curve throughout the area.

“It is meant to slow you down and take it in and reflect on your surroundings,” he said.

Cape Landscape, which was started in 1988, has done other work for David Lawrence and was thrilled to do the project, Caple said.

“We are pretty in tune to the whole design movement with regards to that,” he said, referring to therapeutic design elements. “It gives you a chance to step out of the normal landscape box.”

Finishing touches to the new garden will take place Saturday when 20 volunteers from Living Word Church on Immokalee Road will paint a fence next to the garden.

That day has been designated by the nondenominational church, located six miles east of Interstate 75, as “Big Serve Day” where several hundred church members will volunteer at 24 events in the community, Rob Smith, the associate pastor, said.

The concept is to make sure the church gives back to the community. This is the first year for the event, which is intended to be done annually and expanded, Smith said. 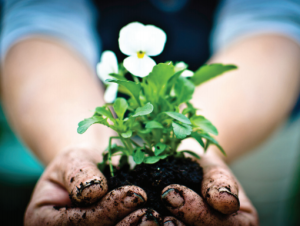 JFCS was awarded $6,500 to establish a horticultural therapy garden at the Naples Senior Center. Through collaboration with Isabel Way-Soto UF/IFAS Collier County Master Gardener/FYN Coordinator, Naples Senior Center members who are interested in gardening will become part of  “The Gardening Center.”  Working on raised garden beds with ergonomically correct tools designed for seniors, the program will promote health and well-being through the process of planning, planting and caring for a variety of plants in an indoor garden.

With some modification the program will also be part of the two JFCS dementia respite programs.